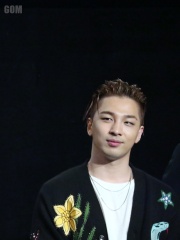 Dong Young-bae (Korean: 동영배; born May 18, 1988), better known by his stage names Taeyang (meaning "sun" in Korean) and SOL (when performing in Japan), is a South Korean singer, songwriter and dancer. After appearing in Jinusean's music video "A-yo", Taeyang began training under YG Entertainment at the age of 12. Six years later, he made his debut in 2006 as a member of the South Korean boy band Big Bang. Read more on Wikipedia

Page views of Taeyangs by language

Among singers, Taeyang ranks 1,639 out of 3,541. Before him are Demet Akalın, Carly Rae Jepsen, Seo Kang-joon, Tony Cetinski, Tajči, and Nelly. After him are Mika Nakashima, Sergey Lazarev, Greg Graffin, Lawrence Tibbett, Anne-Marie, and Bruce Hornsby.