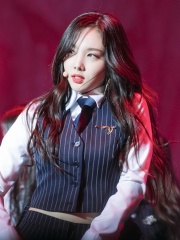 Im Na-yeon (Korean: 임나연; Hanja: 林娜璉; born September 22, 1995), known mononymously as Nayeon (Korean: 나연), is a South Korean singer. After participating in the reality survival television show Sixteen in 2015, she became a singer in the South Korean girl group Twice formed by JYP Entertainment. She is the oldest member of Twice. Read more on Wikipedia

Since 2007, the English Wikipedia page of Nayeon has received more than 522,430 page views. Her biography is available in 16 different languages on Wikipedia making her the 1,766th most popular singer.

Page views of Nayeons by language

Among singers, Nayeon ranks 1,774 out of 3,001. Before her are Oumou Sangaré, Ben Moody, Mohombi, Nâdiya, Amy Grant, and Roger Cicero. After her are Giorgos Alkaios, Freddie Aguilar, Can Bonomo, Sergio Dalma, Eldar Gasimov, and Marcus Mumford.