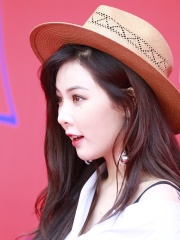 Kim Hyun-ah (born June 6, 1992), better known by the mononym Hyuna, is a South Korean singer-songwriter, rapper and model. She debuted as a member of the girl group Wonder Girls in February 2007. After leaving the ensemble shortly after, Hyuna subsequently left JYP Entertainment and joined the girl group 4Minute, under Cube Entertainment. Read more on Wikipedia

Since 2007, the English Wikipedia page of Hyuna has received more than 3,194,378 page views. Her biography is available in 41 different languages on Wikipedia making her the 1,297th most popular singer.

Page views of Hyunas by language

Among singers, Hyuna ranks 1,304 out of 3,001. Before her are Raf, Method Man, Kirka, Marie Kraja, Hadise, and Steve Lawrence. After her are Bobby Vee, Aaron Neville, Peter Sarstedt, Mac Miller, Peter Murphy, and Frederica von Stade.