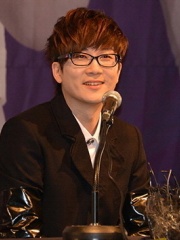 Jeong Hyeon-cheol (Korean: 정현철; born February 21, 1972), better known as Seo Taiji or Seo Tae-ji (서태지), is a South Korean singer, musician, songwriter and record producer. After dropping out of high school to pursue a music career, he rose to become one of the most prominent and influential cultural icons in South Korea, with many referring to him as "the President of Culture".Following a brief stint in the heavy metal band Sinawe, Taiji formed Seo Taiji and Boys in 1992 with whom he found immediate success. Their style of music, dance, fashion, and self-presentation resonated with the young generation—termed the sinsedae, "new generation." They incorporated elements of popular musical genres from the West and contributed considerably larger to Korean pop culture and Korean pop's development in the 1990s. Read more on Wikipedia