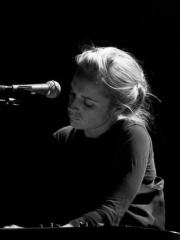 Agnes Caroline Thaarup Obel (born 28 October 1980) is a Danish singer, songwriter, and musician based in Berlin. Her debut album, Philharmonics (2010), was released by PIAS Recordings, and was certified gold in June 2011 by the Belgian Entertainment Association (BEA) after selling 10,000 units. At the Danish Music Awards in November 2011, Obel won five prizes, including Best Album and Best Debut Artist. Read more on Wikipedia

Among singers, Agnes Obel ranks 1,381 out of 3,541. Before her are Hanne Krogh, Sibel Can, Rufus Thomas, David Alexandre Winter, Silvi Vrait, and Souad Massi. After her are DMX, Vic Damone, Emma Abbott, Yuri Shevchuk, Flo Rida, and Leroy Carr.

Among SINGERS In Denmark