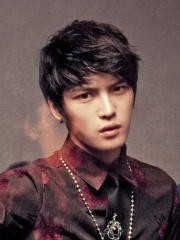 Kim Jae-joong (Korean: 김재중; Hanja: 金在中; born January 26, 1986), also known mononymously as Jaejoong, is a South Korean singer, songwriter, actor and director. He is a member of the Korean pop group JYJ and was one of the original members of boy band TVXQ. Since 2013, he has expanded his range of activities as a solo artist and is also known by the stage names Hero Jaejoong (in South Korea), Jejung/J-Jun (ジェジュン) (in Japan), and 英雄在中 (영웅재중) (in China). Born in Gongju, Chungcheongnam-do, he moved to Seoul as a teenager to audition for SM Entertainment. From 2003 to 2010, he was the lead vocalist of South Korean boy band TVXQ. Later, he sued SM Entertainment along with Park Yoo-chun and Kim Jun-su and together they separated from TVXQ to form JYJ. Read more on Wikipedia