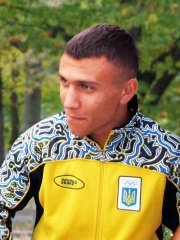 Vasyl Anatoliyovych Lomachenko (Ukrainian: Василь Анатолійович Ломаченко, IPA: [wɐˈsɪlʲ lomɐˈtʃɛnko]; also spelled Vasiliy; born 17 February 1988) is a Ukrainian professional boxer. He is a former world champion in three weight classes, having held the WBO featherweight title from 2014 to 2015; the WBO junior lightweight title from 2016 to 2017; and the unified WBA (Super), WBC, WBO and Ring magazine lightweight titles between 2018 to October 2020. Lomachenko is one of the most successful amateur boxers of all time, possessing a record of 396 wins and 1 loss, with that loss avenged twice. Read more on Wikipedia

Among BOXERS In Ukraine

Among boxers born in Ukraine, Vasyl Lomachenko ranks 1. After him are Volodymyr Sydorenko (1976), Oleksandr Gvozdyk (1987), and Vyacheslav Glazkov (1984).