This page contains a list of the greatest South Korean Singers. The pantheon dataset contains 3,541 Singers, 117 of which were born in South Korea. This makes South Korea the birth place of the 5th most number of Singers behind Italy and France. 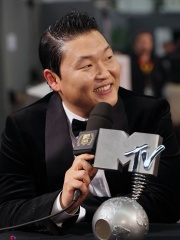 With an HPI of 67.95, Psy is the most famous South Korean Singer.  His biography has been translated into 89 different languages on wikipedia.

Park Jae-sang (Korean: 박재상; Hanja: 朴載相, IPA: [pɐk̚.t͡ɕεsɐŋ]; born December 31, 1977), known professionally as Psy (stylized in all caps as PSY) (싸이; SY; Korean: [s͈ai]), is a South Korean singer, rapper, songwriter, and record producer. Psy is known domestically for his humorous videos and stage performances, and internationally for his hit single "Gangnam Style". The song's refrain was entered into The Yale Book of Quotations as one of the most famous quotations of 2012.On October 23, 2012, Psy met United Nations Secretary-General Ban Ki-moon at the UN Headquarters where Ban expressed his desire to work with the singer because of his "unlimited global reach". On December 21, 2012, his music video for "Gangnam Style" exceeded one billion views on YouTube, becoming the first video to do so in the website's history. Psy was subsequently recognized by the media as the King of YouTube. On May 31, 2014, the video for Psy's "Gangnam Style" hit two billion views. As of March 2022, it is the eleventh most viewed video on YouTube, with over 4 billion views.In December 2012, MTV noted Psy's rise from being little known outside South Korea, to being hailed as the "Viral Star of 2012". On December 31, 2012, Psy performed in a globally televised New Year's Eve celebration with American rapper MC Hammer on-stage in front of a live audience of over a million people in Times Square, New York City. Following his departure from YG Entertainment in 2018, he founded his own company, P Nation, in 2019. 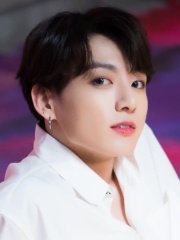 With an HPI of 65.04, Jungkook is the 2nd most famous South Korean Singer.  Her biography has been translated into 44 different languages.

Jeon Jung-kook (Korean: 전정국; born September 1, 1997), known mononymously as Jungkook, is a South Korean singer and songwriter. He is the youngest member and vocalist of the South Korean boy band BTS. 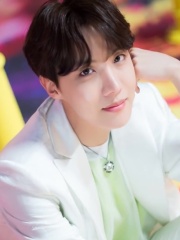 With an HPI of 63.53, J-Hope is the 3rd most famous South Korean Singer.  His biography has been translated into 33 different languages.

Jung Ho-seok (Korean: 정호석; born February 18, 1994), better known by his stage name J-Hope (stylized as j-hope), is a South Korean rapper, songwriter, dancer, and record producer. He made his debut as a member of South Korean boy band BTS in 2013, under Big Hit Entertainment. J-Hope released his first solo mixtape, Hope World, in 2018. The album was met with a positive reception from critics, and peaked at number 38 on the Billboard 200 in the United States, making him the highest-charting solo Korean artist on the ranking at the time. He became the first member of BTS to enter the Billboard Hot 100 as a soloist in 2019, when his single "Chicken Noodle Soup", featuring singer Becky G, debuted at number 81 on the chart. 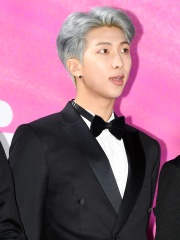 With an HPI of 63.49, RM is the 4th most famous South Korean Singer.  His biography has been translated into 34 different languages.

Kim Nam-joon (Korean: 김남준; born September 12, 1994), known professionally as RM (formerly Rap Monster), is a South Korean rapper, songwriter and record producer. He is the leader of the South Korean boy group BTS. In 2015, he released his first solo mixtape, RM. In October 2018, his second mixtape, Mono, was the highest-charting album by a Korean soloist on the Billboard 200 chart, having peaked at number 26. He has recorded with artists such as Wale, Younha, Warren G, Gaeko, Krizz Kaliko, MFBTY, Fall Out Boy, Primary, and Lil Nas X. 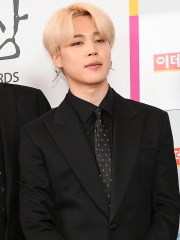 With an HPI of 62.16, Jimin is the 5th most famous South Korean Singer.  His biography has been translated into 35 different languages.

Park Ji-min (Korean: 박지민; born October 13, 1995), known mononymously as Jimin, is a South Korean singer and dancer. In 2013, he made his debut as a member of the South Korean boy group BTS, under the record label Big Hit Entertainment. 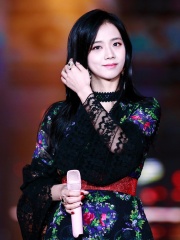 With an HPI of 61.13, Jisoo is the 6th most famous South Korean Singer.  Her biography has been translated into 31 different languages.

Kim Ji-soo (Korean: 김지수; born January 3, 1995), known mononymously as Jisoo, is a South Korean singer and actress. She debuted as a member of the girl group Blackpink, formed by YG Entertainment, in August 2016. After making her acting debut with a cameo role in the 2015 series The Producers, she played her first leading role in the JTBC series Snowdrop (2021–22). 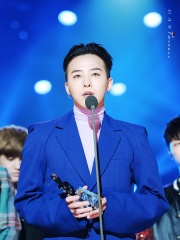 With an HPI of 60.92, G-Dragon is the 7th most famous South Korean Singer.  His biography has been translated into 39 different languages.

Kwon Ji-yong (Korean: 권지용; born August 18, 1988), also known by his stage name G-Dragon, is a South Korean rapper, singer-songwriter, record producer, entrepreneur and fashion designer, known as the "King of K-pop". G-Dragon officially debuted in 2006, as the leader of the South Korean group, Big Bang.In 2009, he released his first solo album Heartbreaker and the title track of the same name, were commercially successful, becoming the best-selling album by a Korean soloist at the time and earning him Album of the Year at the 2009 Mnet Asian Music Awards. G-Dragon collaborated with fellow Big Bang member T.O.P to release the album GD & TOP in 2010. His first EP One of a Kind (2012), was critically acclaimed and had three singles: "One of a Kind", "Crayon", and the chart-topper "That XX". The EP earned Record of the Year at the 2013 Seoul Music Awards. In 2013, he embarked on his first worldwide tour as a solo artist, making him the first Korean soloist to tour Japanese dome arenas. G-Dragon was awarded Artist of the Year at the 2013 Mnet Asian Music Awards following the success of his second album Coup d'Etat (2013). His 2017 EP, Kwon Ji Yong, yielded the number one single "Untitled, 2014", and the supporting concert tour Act III: M.O.T.T.E became the largest tour ever conducted by a Korean soloist.Widely recognized for his influence on youth culture, fashion trends, and music in South Korea, G-Dragon was named by Forbes in 2016 as the most influential person under 30 in Asia's entertainment and sports. G-Dragon has written or co-written 23 number one songs on the Gaon Digital Chart most of which he has also co-produced. 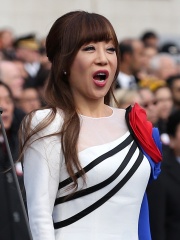 With an HPI of 60.24, Sumi Jo is the 8th most famous South Korean Singer.  Her biography has been translated into 22 different languages. 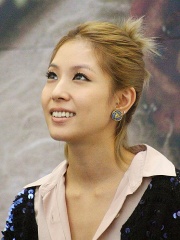 With an HPI of 59.94, BoA is the 9th most famous South Korean Singer.  Her biography has been translated into 47 different languages.

Kwon Bo-ah (Korean: 권보아; born November 5, 1986), known professionally as BoA, is a South Korean singer, songwriter, dancer, record producer and actress. One of the most successful and influential Korean entertainers, she has been dubbed the "Queen of K-pop."Born and raised in Gyeonggi-do, South Korea, BoA was discovered by SM Entertainment talent agents when she accompanied her older brother, a music video director, to a talent search in 1998. She was trained for two years and made her debut in August 2000. BoA has released twenty studio albums, including ten in Korean, nine in Japanese, and one in English. On television, she appeared as a judge on the reality competition show K-pop Star (2011–2013), as an actress on the television drama Listen to Love (2016), as a host for the second season of Produce 101 (2017), and as a coach for the third season of The Voice of Korea (2020). BoA's ability to sing in Japanese, English and Mandarin has helped her find commercial success beyond South Korea, in China, Japan, Taiwan, and Singapore. With the release of her debut Japanese studio album, Listen to My Heart (2002), BoA became the first South Korean pop star to break through in Japan following the fall of barriers that had restricted the import and export of entertainment between the countries since the end of World War II. She is the only foreign artist with three albums that have sold more than one million copies in Japan and one of only three female artists with six consecutive number-one studio albums on the Oricon charts since her debut, the others being Japanese singers Ayumi Hamasaki and Hikaru Utada. 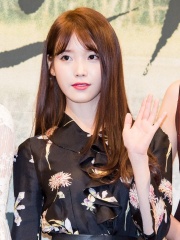 With an HPI of 59.84, IU is the 10th most famous South Korean Singer.  Her biography has been translated into 45 different languages.

Lee Ji-eun (Korean: 이지은; born May 16, 1993), known professionally as IU (Korean: 아이유), is a South Korean singer-songwriter, record producer and actress. The name IU is a combination of 'I' and 'you' meaning "you and I become one through music". She signed with Kakao M (formerly LOEN Entertainment, now Kakao Entertainment) in 2007 as a trainee and debuted as a singer at the age of fifteen with her first mini album Lost and Found (2008). Although her follow-up albums, Growing Up and IU...IM, brought mainstream success, it was after the release of "Good Day" (Korean: 좋은 날), the lead single from her 2010 album Real, that she achieved national stardom. "Good Day" went on to spend five consecutive weeks at the top position of South Korea's Gaon Digital Chart, and in 2019, it was ranked number one on Billboard's "100 Greatest K-Pop Songs of the 2010s" list.With the success of her 2011 albums, Real+ and Last Fantasy, IU established herself as a formidable force on the music charts of her native country and further cemented her girl next door image as Korea's "little sister". She is known now as "The Nation's Sweetheart". 2011 also saw her first foray into songwriting with "Hold My Hand", which was written for the television series The Greatest Love. IU's third full-length album release, Modern Times (2013), showcased a more mature style that marked a departure from her earlier girlish image, with several tracks reaching the top 10 positions on Gaon Digital Chart. The album was ranked number two on Billboard's "25 Greatest K-Pop Albums of the 2010s" list. While her subsequent releases, including albums A Flower Bookmark (2014), Chat-Shire (2015), Palette (2017), Love Poem (2019), and Lilac (2021) continued to deviate from mainstream K-pop styles, but IU still successfully retained her dominance on music charts. Chat-Shire marked the first time she is credited as the sole lyricist and composer of her own album. IU has released a total of five studio albums and nine extended plays in her career, scoring five number-one albums and thirty number-one singles, for thus she holds the record for the artist with most number-one songs in South Korea. One of the best-selling solo acts in the group-dominated K-pop industry, she has been included five times on Forbes magazine's annual Korea Power Celebrity list since 2012 and reached a peak ranking of number three that year. In 2014, Billboard recognized IU as the all-time leader of its K-pop Hot 100 chart with the most number-one songs and the artist who has held the number-one position for the most weeks. She was named Gallup Korea's Singer of the Year in 2014 and in 2017.Aside from her music career, IU has ventured into hosting radio and television shows, as well as acting. Following her supporting role in teen drama Dream High (2011) and minor appearances in several television series, she starred in You're the Best, Lee Soon-shin (2013), Pretty Man (2013-14), The Producers (2015), Moon Lovers: Scarlet Heart Ryeo (2016), My Mister (2018), Persona (2019), and Hotel del Luna (2019).