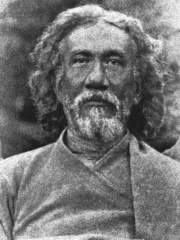 Sri Yukteswar Giri (also written Sriyuktesvara, Sri Yukteshwar) (Devanagari: श्रीयुक्तेश्वर गिरि ) (10 May 1855 – 9 March 1936) is the monastic name of Priya Nath Karar (also spelled as Priya Nath Karada and Preonath Karar), an Indian monk and yogi, and the guru of Paramahansa Yogananda and Swami Satyananda Giri. Born in Serampore, West Bengal, Sri Yukteswar was a Kriya yogi, a Jyotisha (Vedic astrologer), a scholar of the Bhagavad Gita and the Upanishads, an educator, author, and astronomer. He was a disciple of Lahiri Mahasaya of Varanasi and a member of the Giri branch of the Swami order. As a guru, he had two ashrams, one in Serampore and another in Puri, Odisha, between which he alternated his residence throughout the year as he trained disciples.Described by Tibetologist W.Y. Read more on Wikipedia

Since 2007, the English Wikipedia page of Swami Sri Yukteswar Giri has received more than 198,007 page views. His biography is available in 21 different languages on Wikipedia making him the 1,557th most popular religious figure.