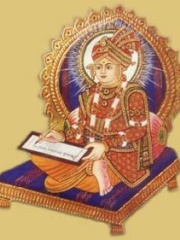 Swaminarayan (IAST: Svāmīnārāyaṇa, 3 April 1781 – 1 June 1830), also known as Sahajanand Swami, was a yogi, and an ascetic whose life and teachings brought a revival of central Hindu practices of dharma, ahimsa and brahmacharya. He is believed by followers to be a manifestation of God.Swaminarayan was born Ghanshyam Pande in Chhapaiya, Uttar Pradesh, India in 1781. In 1792, he began a seven-year pilgrimage across India at the age of 11 years, adopting the name Nilkanth Varni. Read more on Wikipedia

Since 2007, the English Wikipedia page of Swaminarayan has received more than 1,149,962 page views. His biography is available in 23 different languages on Wikipedia making him the 1,633rd most popular religious figure.

Page views of Swaminarayans by language