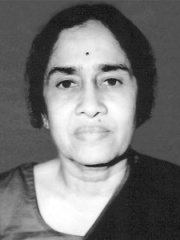 Kamala Sohonie (14 September 1912 – 28 June 1998) was a pioneering Indian biochemist who in 1939 became the first Indian woman to receive a PhD in a scientific discipline. [1] [2] Her acceptance into and work at the Indian Institute of Science, Bangalore, paved the way for women to be accepted into the institution for the first time in it its history.Her research delved into the effects of vitamins and into the nutritive values of pulses, paddy, and groups of food items consumed by some of the poorest sections of the Indian population. Read more on Wikipedia

Since 2007, the English Wikipedia page of Kamala Sohonie has received more than 49,496 page views. Her biography is available in 16 different languages on Wikipedia making her the 458th most popular chemist.