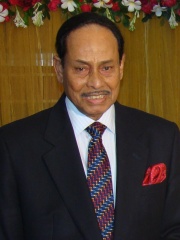 Hussain Muhammad Ershad (Bengali: হুসেইন মুহাম্মদ এরশাদ; 1 February 1930 – 14 July 2019) was a Bangladeshi Army Chief and politician who served as the President of Bangladesh from 1983 to 1990, a time many consider to have been a military dictatorship.He seized power as head of the army during a bloodless coup against President Abdus Sattar on 24 March 1982 (by imposing martial law and suspending the Constitution). He declared himself President in 1983, and subsequently won the controversial 1986 Bangladeshi presidential election. Despite claims to have legitimately won the 1986 election, many consider his regime as an era of military dictatorship. Read more on Wikipedia

Among politicians, Hussain Muhammad Ershad ranks 9,077 out of 15,710. Before him are Kuzma Minin, Manlia Scantilla, Arshak II, Audoin, Ernest Frederick III, Duke of Saxe-Hildburghausen, and Manius Valerius Maximus Corvinus Messalla. After him are Jozef Lenárt, Alcetas II of Epirus, Ado of Vienne, Princess Marie Auguste of Thurn and Taxis, Beatrice of Savoy, and Publius Claudius Pulcher.