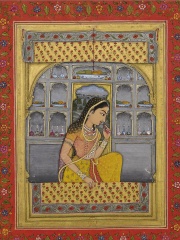 Padmini, also known as Padmavati, was a legendary 13th–14th century Rani (queen) of the Mewar kingdom of present-day India. Several 16th-century texts mention her, of which the earliest source is Padmavat, an epic fictionalized poem written by Malik Muhammad Jayasi in 1540 CE. The Jayasi text describes her story as follows: Padmavati was an exceptionally beautiful princess of the Singhal kingdom (Sri Lanka). Ratan Sen, the Rajput ruler of Chittor Fort, heard about her beauty from a talking parrot named Hiraman. Read more on Wikipedia

Since 2007, the English Wikipedia page of Rani Padmini has received more than 8,989,587 page views. Her biography is available in 19 different languages on Wikipedia making her the 9,820th most popular politician.

Among politicians, Rani Padmini ranks 9,771 out of 14,801. Before her are Jelle Zijlstra, Patriarch Miron of Romania, Nicholas Poppe, Geoffrey III, Count of Anjou, Harilal Gandhi, and Juan Antonio Lavalleja. After her are Gary Hocking, Princess Anna of Hesse and by Rhine, Eadbald of Kent, Cornelis Lely, Sigmar Gabriel, and Aesacus.