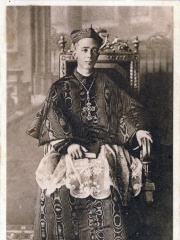 Alfredo Ildefonso Schuster OSB (Italian pronunciation: [alˈfreːdo ildeˈfɔnso ʃˈʃuster], German: [ˈʃuːstɐ]; 18 January 1880 – 30 August 1954), born Alfredo Ludovico Schuster, was an Italian Roman Catholic prelate and professed member from the Benedictines who served as the Archbishop of Milan from 1929 until his death. He became known as Ildefonso as a Benedictine monk and served as an abbot prior to his elevation to the cardinalate.He led the Milanese archdiocese during World War II and was known to have supported Fascism at first. Read more on Wikipedia

Among religious figures, Alfredo Ildefonso Schuster ranks 1,488 out of 2,272. Before him are Tlacaelel, Fernando Filoni, Gustav Trolle, Enrico Dante, Dominik Duka, and Macarius of Alexandria. After him are Alberic of Cîteaux, António de Andrade, Santos Abril y Castelló, Joseph Butler, Adolf Bertram, and Felix of Nola.