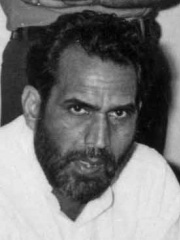 Chandra Shekhar Singh ( 1 July 1927 – 8 July 2007) was an Indian politician who served as the 8th Prime Minister of India, between 10 November 1990 and 21 June 1991. He headed a minority government of a breakaway faction of the Janata Dal with outside support from the Indian National Congress. He was the first Indian Prime Minister who had never held any Government office.His government was largely seen as a "puppet" and "lame duck", and the government was formed with the fewest party MPs in the Lok Sabha. Read more on Wikipedia

Among politicians, Chandra Shekhar ranks 9,134 out of 15,710. Before him are Peter I, Count of Alençon, Wang Can, Hōjō Tokimasa, Michael Dukakis, Julie Payette, and Jigme Khesar Namgyel Wangchuck. After him are King Jing of Zhou, Carl, 3rd Prince of Leiningen, Francisco León de la Barra, Ernst II, Duke of Saxe-Altenburg, Appius Claudius Pulcher, and Fujiwara no Fuhito.