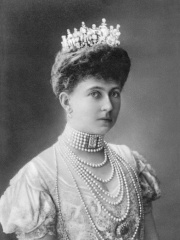 Sophia of Prussia (Sophie Dorothea Ulrike Alice, Greek: Σοφία; 14 June 1870 – 13 January 1932) was Queen consort of the Hellenes during 1913–1917 and 1920–1922. A member of the House of Hohenzollern and child of Frederick III, German Emperor, Sophia received a liberal and anglophile education, under the supervision of her mother Victoria, Princess Royal. In 1889, less than a year after the death of her father, she married her third cousin Constantine, heir apparent to the Greek throne. Read more on Wikipedia

Sophia of Prussia is most famous for being the mother of Frederick the Great.

Page views of Sophia of Prussias by language

Among politicians, Sophia of Prussia ranks 3,683 out of 15,710. Before her are Artabanus IV of Parthia, Maria of Castile, Queen of Aragon, Erhard Heiden, Archduchess Elisabeth Franziska of Austria, Condoleezza Rice, and Seleucus III Ceraunus. After her are Heracles of Macedon, Çandarlı Halil Pasha the Younger, Gelon, Hissène Habré, Magnus, Duke of Holstein, and Hjalmar Siilasvuo.