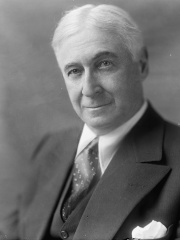 Bernard Mannes Baruch (August 19, 1870 – June 20, 1965) was an American financier and statesman. According to historian Thomas A. Krueger: For half a century Bernard Baruch was one of the country's richest and most powerful men. A great speculator, public official, presidential counselor, political benefactor, and indefatigable almoner, his public life provides a clear view of the inner workings of the American political system.After amassing a fortune on the New York Stock Exchange, he impressed President Woodrow Wilson by managing the nation's economic mobilization in World War I as chairman of the War Industries Board. Read more on Wikipedia

Bernard Baruch was an American financier and presidential advisor. He is most famous for his role in the Treaty of Versailles, as the chairman of the United States War Industries Board during World War I, and for his role as a Wall Street speculator.