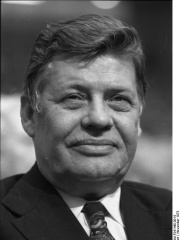 Hanns Martin Schleyer (German pronunciation: [ˈhans ˈmaʁtiːn ˈʃlaɪ̯ɐ]; 1 May 1915 – 18 October 1977) was a German member of the SS, business executive, and employer and industry representative, who served as President of two powerful commercial organizations, the Confederation of German Employers' Associations (Bundesvereinigung der Deutschen Arbeitgeberverbände, BDA) and the Federation of German Industries (Bundesverband der Deutschen Industrie, BDI). Schleyer became a target for radical elements of the German student movement in the 1970s for his role in those business organisations, positions in the labour disputes, aggressive appearance on television, conservative anti-communist views, position as a prominent member of the Christian Democratic Union, and past as an enthusiastic member of the Nazi student movement and a former SS officer.He was kidnapped on 5 September 1977 by the far left Red Army Faction (Rote Armee Fraktion, RAF) and subsequently murdered; his driver and police escort of three policemen were also murdered when his car was ambushed. The German government determined that it was in the national interest not to negotiate with terrorists. Read more on Wikipedia

Among SOCIAL ACTIVISTS In Germany