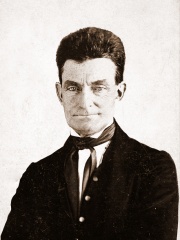 John Brown (May 9, 1800 – December 2, 1859) was an American abolitionist leader. First reaching national prominence for his radical abolitionism and fighting in Bleeding Kansas, he was eventually captured and executed for a failed incitement of a slave rebellion at Harpers Ferry preceding the American Civil War. A man of strong religious convictions, Brown believed he was "an instrument of God",: 248  raised up to strike the death blow to American slavery, a "sacred obligation".: 189  Brown was the leading exponent of violence in the American abolitionist movement:: 426  he believed that violence was necessary to end American slavery, since decades of peaceful efforts had failed. Brown said repeatedly that in working to free the enslaved he was following the Golden Rule, as well as the U.S. Read more on Wikipedia

John Brown was a militant abolitionist who advocated and practiced armed insurrection as the only way to overthrow the institution of slavery in the United States.