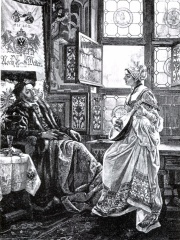 Barbara Blomberg (1527 – 18 December 1597) was the mother of Don John of Austria. Blomberg was born in Ratisbon (modern Germany), the eldest daughter of Wolfgang Plumberger or Blomberg, a burgher, and of his wife Sibilla Lohman. A singer, in 1546 she was for a short time the mistress of the Holy Roman Emperor Charles V, who was in Regensburg for the meeting of the Imperial Diet. Read more on Wikipedia

Barbara Blomberg is most famous for her work in the field of psychology. She is most well known for her research on the effects of prenatal depression on children.

Among religious figures, Barbara Blomberg ranks 816 out of 2,238. Before her are Pope Leo VIII, Sheikh Adi ibn Musafir, Athanasius the Athonite, Saint Silvia, Diego de Landa, and Antipas of Pergamum. After her are Simeon of Jerusalem, Menachem Mendel Schneerson, Zeno of Verona, Columba, Theodore Stratelates, and Abd Manaf ibn Qusai.