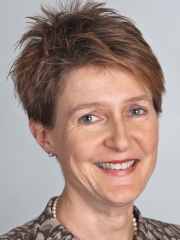 Simonetta Myriam Sommaruga (born 14 May 1960) is a Swiss politician who served as President of the Swiss Confederation for 2020. A member of the Social Democratic Party (SP/PS), she has been a Member of the Swiss Federal Council since 2010. Sommaruga has served as head of the Federal Department of Environment, Transport, Energy and Communications since 2019 and previously was head of the Federal Department of Justice and Police. Read more on Wikipedia

Among politicians, Simonetta Sommaruga ranks 4,016 out of 15,710. Before her are William, Duke of Nassau, Jiroemon Kimura, Haitham bin Tariq, Paolo Gentiloni, Johann I Joseph, Prince of Liechtenstein, and Birger, King of Sweden. After her are Rudy Giuliani, Hadım Suleiman Pasha, Juan, Count of Montizón, Joachim I Nestor, Elector of Brandenburg, George Vella, and Emperor Hanzei.