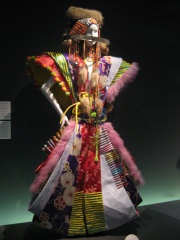 John Charles Galliano (born 28 November 1960) is a Gibraltar-born British fashion designer who was the head designer of French fashion companies Givenchy (July 1995 to October 1996), Christian Dior (October 1996 to March 2011), and his own label John Galliano (1988 to 2011). At present, Galliano is the creative director of Paris-based fashion house Maison Margiela.Galliano has been named British Designer of the Year four times. Read more on Wikipedia

Since 2007, the English Wikipedia page of John Galliano has received more than 1,257,907 page views. His biography is available in 32 different languages on Wikipedia making him the 19th most popular fashion designer.

Among people born in Gibraltar, John Galliano ranks 1 out of 2. After him are Fabian Picardo (1972).

Others born in Gibraltar