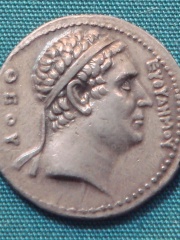 Euthydemus I (Greek: Εὐθύδημος, Euthydemos) c. 260 BC – 200/195 BC) was a Greco-Bactrian king and founder of the Euthydemid dynasty. He is thought to have originally been a governor of Sogdia, who seized the throne by force from Diodotus II in 224 BC. Literary sources, notably Polybius, record how he and his son Demetrius resisted an invasion by the Seleucid king Antiochus III from 209 to 206 BC. Read more on Wikipedia

Page views of Euthydemus IS by language

Among politicians, Euthydemus I ranks 7,746 out of 15,710. Before him are Ordulf, Duke of Saxony, Íngrid Betancourt, Catherine I, Latin Empress, Basil of Trebizond, Alexander Yakovlev, and Publius Cornelius Scipio Nasica Serapio. After him are Iolu Abil, John, Constable of Portugal, Malam Bacai Sanhá, Kaʻahumanu, Andrea Contarini, and Ilija Garašanin.

Others Deceased in 260 BC