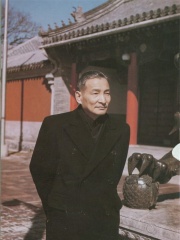 Chen Yun (simplified Chinese: 陈云; traditional Chinese: 陳雲; pinyin: Chén Yún, pronounced [ʈʂʰə̌n y̌n]; 13 June 1905 – 10 April 1995) was one of the most influential leaders of the People's Republic of China during the 1980s and 1990s and one of the major architects and important policy makers for the Reform and opening up, alongside Deng Xiaoping. He was also known as Liao Chenyun (廖陈云), as he took his uncle's (Liao Wenguang; 廖文光) family name when he was adopted by him after his parents died. He was one of the major political leaders of China both during and after the Chinese Civil War, along with Mao Zedong, Liu Shaoqi, Zhou Enlai, Zhu De and Ren Bishi, and was later recognized as one of the Eight Elders of the Chinese Communist Party. Read more on Wikipedia

Among politicians, Chen Yun ranks 6,013 out of 15,710. Before him are Lennart Bernadotte, William Clito, Mieszko III the Old, Jan Syrový, Agnes of France, Duchess of Burgundy, and Zhang Chunqiao. After him are Rothari, Chung Sye-kyun, Belisario Betancur, Wacho, Myechyslaw Hryb, and Helena of Moscow.