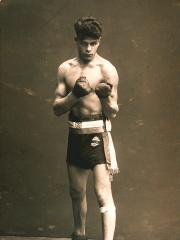 Johann Wilhelm "Rukeli" Trollmann (27 December 1907 – April 1944) was a German Sinto boxer.Trollmann became famous in the late 1920s. On 9 June 1933, he fought for the German light-heavyweight title and although he clearly led by points over his opponent Adolf Witt, the fight was judged "no result". The audience rebelled, and the Nazi officials were forced to acknowledge Trollmann as the victor. Read more on Wikipedia

Among politicians, Johann Trollmann ranks 6,513 out of 15,577. Before him are Princess Victoria Adelaide of Schleswig-Holstein, Simonetta Sommaruga, Jalal al-Din Khan ibn Tokhtamysh, Injong of Goryeo, Duke Wilhelm in Bavaria, and Charles d'Albert, duc de Luynes. After him are Andrei Karlov, Philip I, Count of Boulogne, Kim Chaek, Margravine Louise Charlotte of Brandenburg, Hanns Albin Rauter, and Cerdic of Wessex.