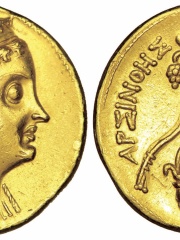 Arsinoë II (Koinē Greek: Ἀρσινόη, 316 BC – unknown date between July 270 and 260 BC) was a Ptolemaic queen and co-regent of the Ptolemaic Kingdom of ancient Egypt. She was given the Egyptian title "King of Upper and Lower Egypt", making her pharaoh as well.Arsinoe was Queen of Thrace, Anatolia, and Macedonia by marriage to King Lysimachus. Read more on Wikipedia

Arsinoe II was the daughter of Ptolemy I and Berenice I, and the sister of Ptolemy II. She was the wife of Lysimachus and mother of Agathocles. Arsinoe II became queen of Egypt after the death of her mother.

Among companions, Arsinoe II ranks 181 out of 673. Before her are Barbara Radziwiłł, Brunhilda of Austrasia, María Isabella of Spain, Maria Amalia of Austria, Clarice Orsini, and Maria Christina of the Two Sicilies. After her are Princess Charlotte of Prussia, Abigail, Matilda of Ringelheim, Maria Theresa of Austria, Constance of Aragon, and Cecilia Bowes-Lyon, Countess of Strathmore and Kinghorne.

Others Deceased in 270 BC