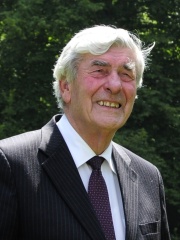 Rudolphus Franciscus Marie "Ruud" Lubbers (Dutch pronunciation: [ˈryt ˈlʏbərs] (listen); 7 May 1939 – 14 February 2018) was a Dutch politician, diplomat and businessman who served as Prime Minister of the Netherlands from 1982 to 1994, and as United Nations High Commissioner for Refugees from 2001 to 2005. He was a member of the Catholic People's Party (KVP), which later merged to become the Christian Democratic Appeal (CDA) party. Lubbers studied Economics at the Rotterdam School of Economics obtaining a Master of Economics degree and worked as a corporate director for the manufacturing company Hollandia in Rotterdam from April 1963 until May 1973 and as trade association executive for the Christian Employers' Association (NCW) from January 1965 until May 1973. Read more on Wikipedia

Ruud Lubbers is most famous for being the Prime Minister of the Netherlands from 1982 to 1994.

Among politicians, Ruud Lubbers ranks 3,910 out of 15,710. Before him are Louis William, Margrave of Baden-Baden, Nariman Narimanov, João Goulart, Louis I of Etruria, Tetisheri, and Antipope Eulalius. After him are Zagan Pasha, André de Montbard, Theodore Komnenos Doukas, Olga Nikolaevna of Russia, Yamato Takeru, and Huang Chao.