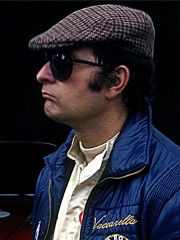 Nino Vaccarella (born 4 March 1933 in Palermo, Sicily) is an Italian former sports car racing and Formula One driver. His principal achievements include winning the 1964 24 Hours of Le Mans, and the Targa Florio in 1965, 1971 and 1975, when it no longer was a World Sportscar Championship event. Read more on Wikipedia

Since 2007, the English Wikipedia page of Nino Vaccarella has received more than 40,661 page views. His biography is available in 17 different languages on Wikipedia making him the 10,459th most popular politician.

Among politicians, Nino Vaccarella ranks 10,407 out of 14,801. Before him are Count Theodosius, Æthelbald of Mercia, Nabu-mukin-zeri, Amir Peretz, Jaime Paz Zamora, and Eriba-Marduk. After him are Joseph Pholien, Carl Schurz, Ivan Shuvalov, Wiglaf of Mercia, Mohammad-Javad Bahonar, and Edward Stettinius Jr..