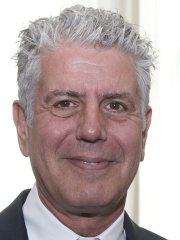 Anthony Michael Bourdain (; June 25, 1956 – June 8, 2018) was an American celebrity chef, author, and travel documentarian who starred in programs focusing on the exploration of international culture, cuisine, and the human condition. Bourdain was a 1978 graduate of The Culinary Institute of America and a veteran of many professional kitchens during his career, which included several years spent as an executive chef at Brasserie Les Halles in Manhattan. Read more on Wikipedia

Anthony Bourdain is an American chef, author, and television personality. He is best known for his memoir Kitchen Confidential: Adventures in the Culinary Underbelly, which was a New York Times bestseller.

Vice News
An Old Anthony Bourdain Clip Has Sparked a Heated Debate About the Treatment of 'Maids'
“You’re living off a repressed underclass,” Bourdain tells his Singaporean hosts, who talk of not filling their own glasses or doing their own washing.
Koh Ewe, Alastair McCready
Dnyuz.com
The Last, Painful Days of Anthony Bourdain...
The Last, Painful Days of Anthony Bourdain... (Third column, 12th story, link) Related stories:Sleeping with prostitutes, hooked on steroids, drinking...
New York Times
Deadline
Anthony Bourdain Texts Published In New Biography Reveal Grim Final Days: “I Hate My Fans…I Hate Being Famous…I Hate My Job” – Report
A new unauthorized biography of Anthony Bourdain, which includes for the first time the celebrity chef’s text messages from the days leading up to his death by suicide in 2018, reveals Bourdain’s anguish over his career, his estranged marriage and his trouble…
Greg Evans
The Hollywood Gossip
Anthony Bourdain Accused of Abandoning Daughter Before Death
When Anthony Bourdain hanged himself in a Paris hotel room in 2018, family, friends, and fans of the beloved author … Anthony Bourdain Accused of Abandoning Daughter Before Death was originally published on The Hollywood Gossip .
Tyler Johnson

Among writers, Anthony Bourdain ranks 1,247 out of 5,755. Before him are Babrius, Poul Anderson, Jerzy Kosiński, Henry Wadsworth Longfellow, Giovanni Verga, and Valerie Solanas. After him are Laura Marx, Per Olov Enquist, Johann Peter Eckermann, Thomas of Celano, Aksel Sandemose, and Marie of Cleves, Duchess of Orléans.