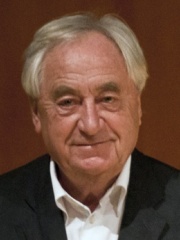 Cees Nooteboom (Dutch pronunciation: [seːs noːtəboːm]; born 31 July 1933) is a Dutch novelist, poet and journalist. After the attention received by his novel Rituelen (Rituals, 1980), which received the Pegasus Prize, it was the first of his novels to be translated into an English edition, published in 1983 by Louisiana State University Press of the United States. LSU Press published his first two novels in English in the following years, as well as other works through 1990. Read more on Wikipedia

Since 2007, the English Wikipedia page of Cees Nooteboom has received more than 88,224 page views. His biography is available in 30 different languages on Wikipedia making him the 933rd most popular writer.

Among WRITERS In Netherlands