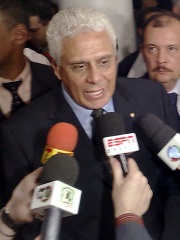 Carlos Roberto de Oliveira, known as Roberto Dinamite (born 13 April 1954) is a Brazilian former footballer and politician. He was born in Duque de Caxias, Rio de Janeiro state. With a career as centre forward spanning over twenty years, Roberto is Vasco da Gama's player with the most appearances and all-time top-scorer, as well as the overall leading scorer in the Brazilian Série A. At the national level, Roberto Dinamite played in the 1978 and 1982 FIFA World Cups and the 1972 Olympic Games. Read more on Wikipedia

Since 2007, the English Wikipedia page of Roberto Dinamite has received more than 179,370 page views. His biography is available in 24 different languages on Wikipedia making him the 1,125th most popular soccer player.