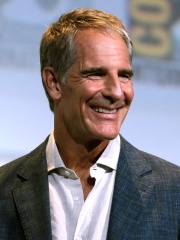 Scott Stewart Bakula (; born October 9, 1954) is an American actor, singer, and director. He is known for his roles in two science-fiction television series: as Sam Beckett on Quantum Leap, and as Captain Jonathan Archer on Star Trek: Enterprise. For Quantum Leap, he received four Emmy Award nominations and a Golden Globe Award. Bakula starred in the comedy-drama series Men of a Certain Age and guest-starred in the second and third seasons of NBC's Chuck as the title character's father Stephen J. Read more on Wikipedia

Since 2007, the English Wikipedia page of Scott Bakula has received more than 4,318,199 page views. His biography is available in 29 different languages on Wikipedia making him the 2,391st most popular actor.