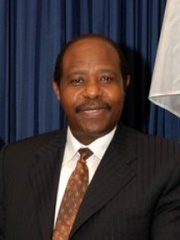 Paul Rusesabagina (Kinyarwanda: [ɾusesɑβaɟinɑ]; born 15 June 1954) is a Rwandan humanitarian who, while working as a manager at the Hôtel des Mille Collines in Kigali, hid and protected 1,268 Hutu and Tutsi refugees from the Interahamwe militia during the Rwandan genocide. None of these refugees were hurt or killed during the attacks. Rusesabagina's efforts were the basis of the dramatized Academy Award-nominated film Hotel Rwanda (2004), in which he was portrayed by American actor Don Cheadle. Read more on Wikipedia

Since 2007, the English Wikipedia page of Paul Rusesabagina has received more than 940,909 page views. His biography is available in 24 different languages on Wikipedia making him the 255th most popular businessperson.

Among BUSINESSPEOPLE In Rwanda