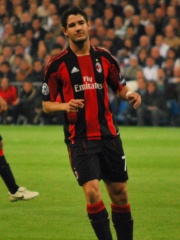 Alexandre Rodrigues da Silva (Portuguese pronunciation: [ɐleˈʃɐ̃dɾi ʁoˈdɾiɡiz dɐ ˈsiwvɐ]; born 2 September 1989), commonly known as Alexandre Pato ([ˈpatu]) or just Pato, is a Brazilian professional footballer who plays as a forward. He is currently a free agent, having most recently played for São Paulo.Pato began his career as a youth player for Internacional in 2000, making his debut in 2006 at age 16. He went on to score 12 goals in 27 appearances and helped them win the 2006 FIFA Club World Cup. Read more on Wikipedia

Since 2007, the English Wikipedia page of Alexandre Pato has received more than 4,237,170 page views. His biography is available in 52 different languages on Wikipedia making him the 1,064th most popular soccer player.