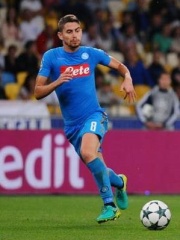 Jorge Luiz Frello Filho, best known as Jorginho (Italian: [(d)ʒorˈ(d)ʒiɲɲo], Brazilian Portuguese: [ʒɔʁˈʒĩj̃u]; born 20 December 1991) is a professional footballer who plays as a midfielder for Premier League club Chelsea and the Italian national team. He operates as a central midfielder, but also can be deployed as a defensive midfielder and a deep-lying playmaker.Born in Brazil, Jorginho moved to Italy at the age of 15, and began his professional career with the Verona youth team, before being promoted to the senior team. During the 2010–11 season, he was sent on loan to Sambonifacese. Read more on Wikipedia

Page views of Jorginhos by language