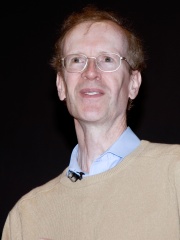 Sir Andrew John Wiles (born 11 April 1953) is an English mathematician and a Royal Society Research Professor at the University of Oxford, specializing in number theory. He is best known for proving Fermat's Last Theorem, for which he was awarded the 2016 Abel Prize and the 2017 Copley Medal by the Royal Society. He was appointed Knight Commander of the Order of the British Empire in 2000, and in 2018, was appointed the first Regius Professor of Mathematics at Oxford. Read more on Wikipedia

Wiles is most famous for proving Fermat's Last Theorem, a theorem that had been unsolved for over 350 years.

Among mathematicians, Andrew Wiles ranks 122 out of 823. Before him are Hermann Weyl, Leonid Kantorovich, Émile Borel, Aloysius Lilius, Edward Norton Lorenz, and Ferdinand von Lindemann. After him are Marian Rejewski, Brook Taylor, Henri Lebesgue, Herbert A. Hauptman, Menelaus of Alexandria, and Andrey Markov.