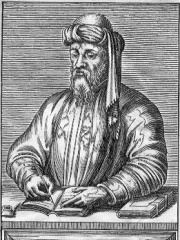 Porphyry of Tyre (; Greek: Πορφύριος, Porphýrios; Arabic: فُرْفُورِيُوس, Furfūriyūs; c. 234 – c. 305 AD) was a Neoplatonic philosopher born in Tyre, Roman Phoenicia during Roman rule. He edited and published The Enneads, the only collection of the work of Plotinus, his teacher. His commentary on Euclid's Elements was used as a source by Pappus of Alexandria.He wrote original works in the Greek language on a wide variety of topics, ranging from music theory to Homer to vegetarianism. Read more on Wikipedia

Since 2007, the English Wikipedia page of Porphyry has received more than 70,750 page views. His biography is available in 46 different languages on Wikipedia. Porphyry is the 172nd most popular philosopher (up from 174th in 2019), the 8th most popular biography from Lebanon and the most popular Lebanese Philosopher.

Porphyry is a type of igneous rock with a large percentage of crystals. It is most famous for being used in the construction of the Pantheon in Rome.

Page views of Porphyries by language