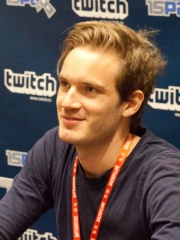 Felix Arvid Ulf Kjellberg ( SHEL-burg, Swedish: [ˈfěːlɪks ˈǎrːvɪd ɵlf ˈɕɛ̂lːbærj] (listen); born 24 October 1989), known online as PewDiePie ( PEW-dee-py), is a Swedish YouTuber known primarily for his Let's Play videos and comedic formatted videos and shows. Kjellberg's popularity on YouTube and extensive media coverage have made him one of the most noted online personalities and content creators. He has been portrayed in the media as a figurehead for YouTube and as being almost synonymous with YouTube gaming. Read more on Wikipedia

Pewdiepie is most famous for his YouTube channel, which he started in 2010. He posts videos of himself playing and commenting on video games, and has over 57 million subscribers.

Page views of PewDiePies by language

Among YOUTUBERS In Sweden