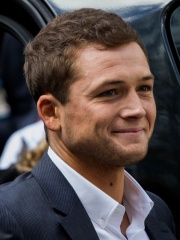 Taron David Egerton (; born 10 November 1989) is a Welsh actor and singer. He is the recipient of such accolades as a Golden Globe Award and has been nominated for two British Academy Film Awards, a Grammy Award, and a Screen Actors Guild Award. He gained worldwide recognition for starring as Gary "Eggsy" Unwin in the action comedy film Kingsman: The Secret Service (2014) and its sequel Kingsman: The Golden Circle (2017). Read more on Wikipedia

Since 2007, the English Wikipedia page of Taron Egerton has received more than 15,110,568 page views. His biography is available in 31 different languages on Wikipedia making him the 1,809th most popular actor.