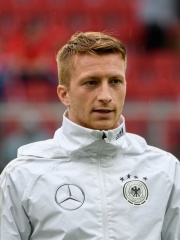 Marco Reus (German pronunciation: [ˈmaʁkoː ˈʁɔʏs]; born 31 May 1989) is a German professional footballer who plays as a forward or attacking midfielder for Bundesliga club Borussia Dortmund and the Germany national team. Reus spent his youth career at Borussia Dortmund, prior to leaving for Rot Weiss Ahlen. He joined Borussia Mönchengladbach in 2009, where he had his most successful season in 2012 when, scoring 18 goals and having 8 assists in the Bundesliga, he helped Borussia Mönchengladbach secure a place in the following season's UEFA Champions League. Read more on Wikipedia

Since 2007, the English Wikipedia page of Marco Reus has received more than 3,651,558 page views. His biography is available in 65 different languages on Wikipedia making him the 686th most popular soccer player.