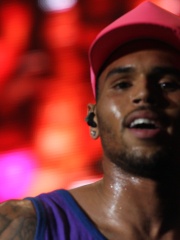 Christopher Maurice Brown (born May 5, 1989) is an American singer, songwriter, dancer and actor. Born in Tappahannock, Virginia, he was involved in his church choir and several local talent shows from a young age. Having signed with Jive Records in 2004, Brown released his self-titled debut studio album the following year, which became certified double platinum by the Recording Industry Association of America (RIAA).With his first single "Run It!" peaking atop the Billboard Hot 100, Brown became the first male artist since 1997 to have his debut single top the chart. Read more on Wikipedia

Since 2007, the English Wikipedia page of Chris Brown has received more than 15,756,245 page views. His biography is available in 60 different languages on Wikipedia making him the 332nd most popular singer.