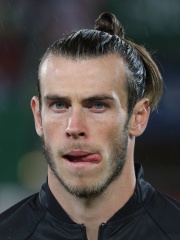 Gareth Frank Bale (born 16 July 1989) is a Welsh professional footballer who plays as a winger for Major League Soccer club Los Angeles FC and the Wales national team. He is widely regarded as one of the greatest wingers of his generation and one of the greatest Welsh players of all time.Bale began his professional career at Southampton, playing at left-back and earning acclaim as a free kick specialist. Bale moved to Tottenham Hotspur in 2007, for an eventual £7 million fee. Read more on Wikipedia

Daily Mail
Gareth Bale 'has a break in his contract that could see him leave LAFC'
After leaving Real Madrid in the summer, Bale signed an 18-month deal with LAFC, but made just two league starts in his opening months at the club as he tried to stay fit ahead of the World Cup.
Sam Brookes
Daily Mail
Wales fans insist it's time for Aaron Ramsey and Gareth Bale to retire
Wales fans took to social media after the game to thank Gareth Bale and Aaron Ramsey for their contribution to Wales over the years, but insist it was time for them to retire.
Charlotte Daly
Daily Mail
Gabby Agbonlahor blasts Gareth Bale for 'playing walking football' in Wales' defeat by England
Bale only lasted 45 minutes and wasn't able to make any impact, with Wales ultimately losing 3-0 and being eliminated from the tournament.
Jeorge Bird
Daily Mail
IAN HERBERT: Wales NEED Gareth Bale to stick around even after World Cup disappointment
IAN HERBERT DEPUTY CHIEF SPORTS WRITER IN DOHA: Ramsey had not publicly discussed the World Cup once out here and Bale did so only to fulfil FIFA obligations.
Ian Herbert