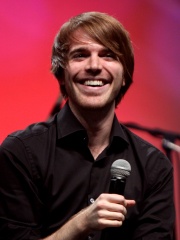 Shane Lee Yaw (born July 19, 1988), known professionally as Shane Dawson, is an American YouTuber, actor, writer, comedian, director, make-up artist, and musician. He was one of the first people to rise to fame on video-sharing website YouTube, and has since maintained an online presence.In 2008, when Dawson was nineteen years old, he joined YouTube and began making videos. He rose to fame on the site, garnering over half a billion views by 2010. Read more on Wikipedia

Since 2007, the English Wikipedia page of Shane Dawson has received more than 5,244,954 page views. His biography is available in 38 different languages on Wikipedia making him the 8,027th most popular youtuber.

Jezebel
An Extremely Intricate Guide to Beauty YouTube's Never-Ending Beef: Shane Dawson vs. Jeffree Star vs. James Charles vs. Tati Westbrook
YouTube is an infernal cesspit that imbues those who use its platform to further their own nascent celebrity with an undue sense of power and overlooked responsibility. It is no surprise, then, that the drama that unfolds between its stars, is petty, unnecess…
Maria Sherman and Megan Reynolds

Among youtubers, Shane Dawson ranks 6 out of 13. Before him are PewDiePie, Smosh, Rémi Gaillard, Daniel Howell, and Pat Condell. After him are Marzia Bisognin, Markiplier, Jenna Marbles, Michael Stevens, Zoella, and Ryan Higa.