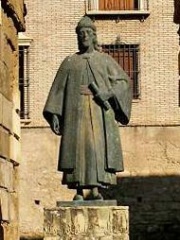 Abū Muḥammad ʿAlī ibn Aḥmad ibn Saʿīd ibn Ḥazm (Arabic: أبو محمد علي بن احمد بن سعيد بن حزم; also sometimes known as al-Andalusī aẓ-Ẓāhirī; 7 November 994 – 15 August 1064 [456 AH]) was an Andalusian Muslim polymath, historian, jurist, philosopher, and theologian, born in the Caliphate of Córdoba, present-day Spain. Described as one of the strictest hadith interpreters, Ibn Hazm was a leading proponent and codifier of the Zahiri school of Islamic thought and produced a reported 400 works, of which only 40 still survive. In all, his written works amounted to some 80 000 pages. Read more on Wikipedia

Ibn Hazm was most famous for writing a book called "The Ring of the Dove" which is a book on love.

Among religious figures, Ibn Hazm ranks 505 out of 2,238. Before him are Jethro, Saint Marinus, Pope Eleutherius, Sabbas the Sanctified, Josemaría Escrivá, and Father Damien. After him are Pope Victor I, Abdullah ibn Umar, Charles de Foucauld, Mary of Egypt, Pope Nicholas II, and Pope John II.