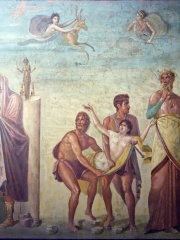 Calchas (; Ancient Greek: Κάλχας, Kalkhas) is an Argive mantis, or "seer," dated to the Age of Legend, which is an aspect of Greek mythology. Calchas appears in the opening scenes of the Iliad, which is believed to have been based on a war conducted by the Achaeans against the powerful city of Troy in the Late Bronze Age. Calchas, a seer in the service of the army before Troy, is portrayed as a skilled augur, Greek ionópolos ('bird-savant'): "as an augur, Calchas had no rival in the camp."He received knowledge of the past, present, and future from the god, Apollo. Read more on Wikipedia

Calchas is most famous for being the soothsayer that predicted the Trojan War.

Page views of Calchas by language

Among politicians, Calchas ranks 3,089 out of 15,710. Before him are Frederick I, Elector of Brandenburg, Ivan Asen II of Bulgaria, Dương Văn Minh, David of Trebizond, Władysław Anders, and Artavasdes II of Armenia. After him are Paul Henri Balluet d'Estournelles de Constant, Juba I of Numidia, Hisham II, Xiao He, Louis II of Anjou, and Wenceslaus I of Bohemia.