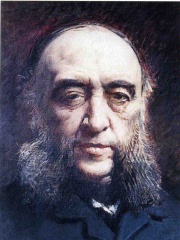 Jules François Camille Ferry (French: [ʒyl fɛʁi]; 5 April 1832 – 17 March 1893) was a French statesman and republican philosopher. He was one of the leaders of the Moderate Republicans and served as Prime Minister of France from 1880 to 1881 and 1883 to 1885. He was a promoter of laicism and colonial expansion. Read more on Wikipedia

Jules Ferry is most famous for being the Prime Minister of France and for passing the Ferry Laws. These laws said that all French children were required to go to school, and that they had to speak French in school.

Among politicians, Jules Ferry ranks 3,662 out of 15,710. Before him are Vasili Kuznetsov, Rafael Correa, Simeon of Moscow, Hsekiu, Huo Qubing, and Princess Anna Sophie of Denmark. After him are Domitia Lepida the Younger, Phraates IV, Al-Mu'izz li-Din Allah, Muhammad al-Nasir, Fouad Mebazaa, and Bayinnaung.