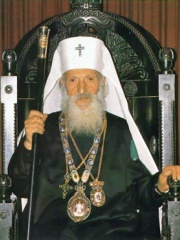 Pavle (Serbian Cyrillic: Павле, English: Paul; 11 September 1914 – 15 November 2009) was the 44th Patriarch of the Serbian Orthodox Church, the spiritual leader of Eastern Orthodox Serbs, from 1990 to his death. His full title was His Holiness the Archbishop of Peć, Metropolitan of Belgrade and Karlovci, and Serbian Patriarch Pavle. Before his death, he was the oldest living leader of an Eastern Orthodox church. Read more on Wikipedia

Since 2007, the English Wikipedia page of Pavle, Serbian Patriarch has received more than 48,552 page views. His biography is available in 26 different languages on Wikipedia making him the 4,664th most popular religious figure.

Among religious figures, Pavle, Serbian Patriarch ranks 923 out of 2,001. Before him are Arnaud Amalric, Ippolito de' Medici, Euthymius the Great, Giuseppe Bertello, Carlo Maria Martini, and Simeon Stylites the Younger. After him are Lucian of Antioch, Eleazar, Otto of Bamberg, Martin of Braga, Felicitas of Rome, and Margaret of Cortona.