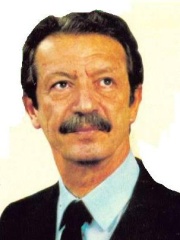 Shapour Bakhtiar (Persian: شاپور بختیار, listen ; 26 June 1914 – 6 August 1991) was an Iranian politician who served as the last Prime Minister of Iran under the Mohammad Reza Shah Pahlavi. In the words of historian Abbas Milani: "more than once in the tone of a jeremiad he reminded the nation of the dangers of clerical despotism, and of how the fascism of the mullahs would be darker than any military junta". Read more on Wikipedia

Among politicians, Shapour Bakhtiar ranks 6,001 out of 15,577. Before him are Diagoras of Rhodes, John II, Count of Holland, Hydatius, Cai Yong, Ebroin, and John Talbot, 1st Earl of Shrewsbury. After him are Ferdinand, Prince of Asturias, Otto V, Duke of Bavaria, Charles Alexander, Grand Duke of Saxe-Weimar-Eisenach, Matvei Zakharov, Princess Margaret Yolande of Savoy, and Odo IV, Duke of Burgundy.