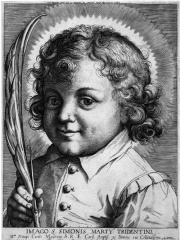 Simon of Trent (German: Simon von Trient, also known as Simon Unverdorben (meaning Simon Immaculate in German); Italian: Simonino di Trento), also known as Simeon (1472–1475), was a boy from the city of Trent (now Trento in northern Italy), in the Prince-Bishopric of Trent, whose disappearance and death was blamed on the leaders of the city's Jewish community, based on the confessions of Jews obtained under judicial torture. Read more on Wikipedia

Page views of Simon of Trents by language

Among people born in 1472, Simon of Trent ranks 7. Before him are Lucas Cranach the Elder, Bianca Maria Sforza, Piero the Unfortunate, Fra Bartolomeo, Wang Yangming, and Guidobaldo da Montefeltro. After him are Marie of Luxembourg, Countess of Vendôme, Érard de la Marck, and Blanche of Montferrat. Among people deceased in 1475, Simon of Trent ranks 8. Before him are Petrus Christus, Dieric Bouts, Radu cel Frumos, Bartolomeo Colleoni, Joan of Portugal, and Afanasy Nikitin. After him are Albert van Ouwater, Theodorus Gaza, Sin Sukju, Charles I, Margrave of Baden-Baden, and Henry Holland, 3rd Duke of Exeter.