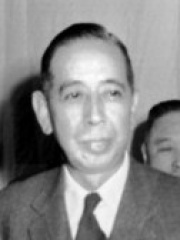 Nobusuke Kishi (岸 信介, Kishi Nobusuke, 13 November 1896 – 7 August 1987) was a Japanese bureaucrat and politician who was Prime Minister of Japan from 1957 to 1960. Known for his exploitative rule of the Japanese puppet state of Manchukuo in Northeast China in the 1930s, Kishi was nicknamed the "Monster of the Shōwa era" (昭和の妖怪; Shōwa no yōkai). Read more on Wikipedia

Nobusuke kishi is most famous for being a samurai that was killed by the Tokugawa Shogunate. He was killed because he refused to take an oath of allegiance to the shogunate.

Among politicians, Nobusuke Kishi ranks 3,111 out of 15,577. Before him are Frederick I, Duke of Swabia, Léon Bourgeois, Prince Pierre, Duke of Valentinois, Emperor Cheng of Han, Cardinal-Infante Ferdinand of Austria, and Oswald Pohl. After him are Margaret of York, Alexander Karađorđević, Prince of Serbia, Gyeongjong of Goryeo, John George III, Elector of Saxony, Marduk-apla-iddina II, and Traian Băsescu.